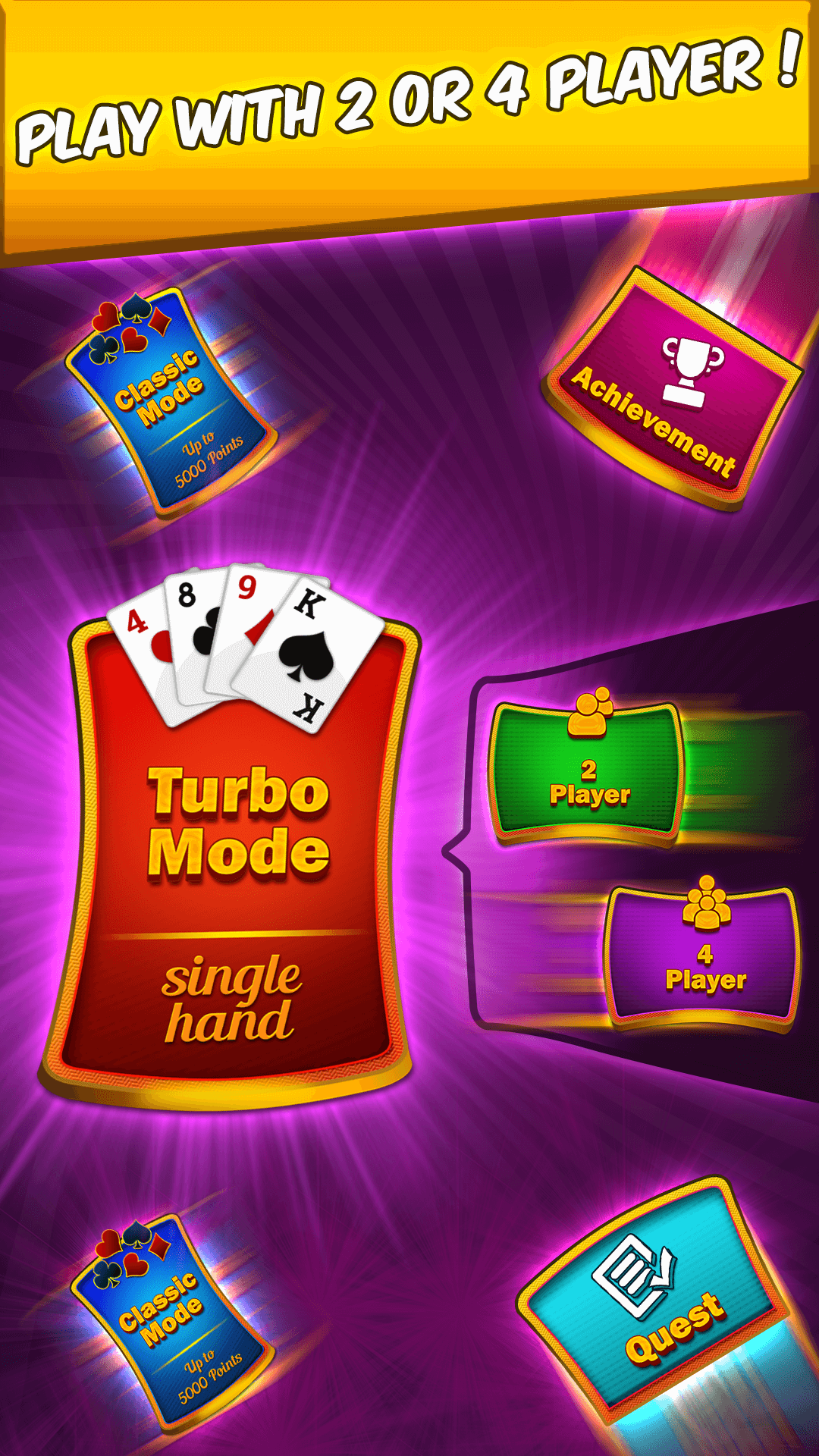 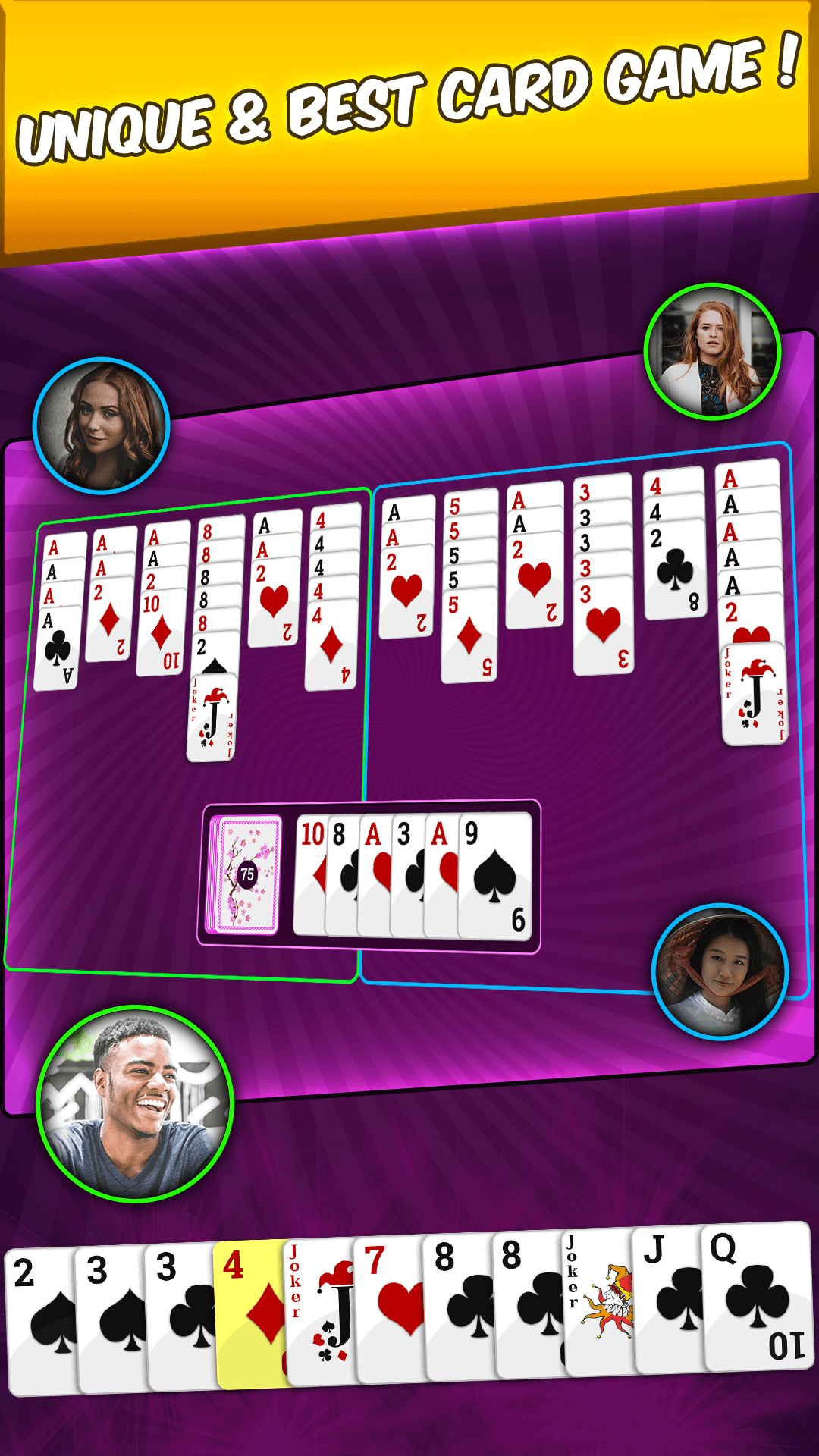 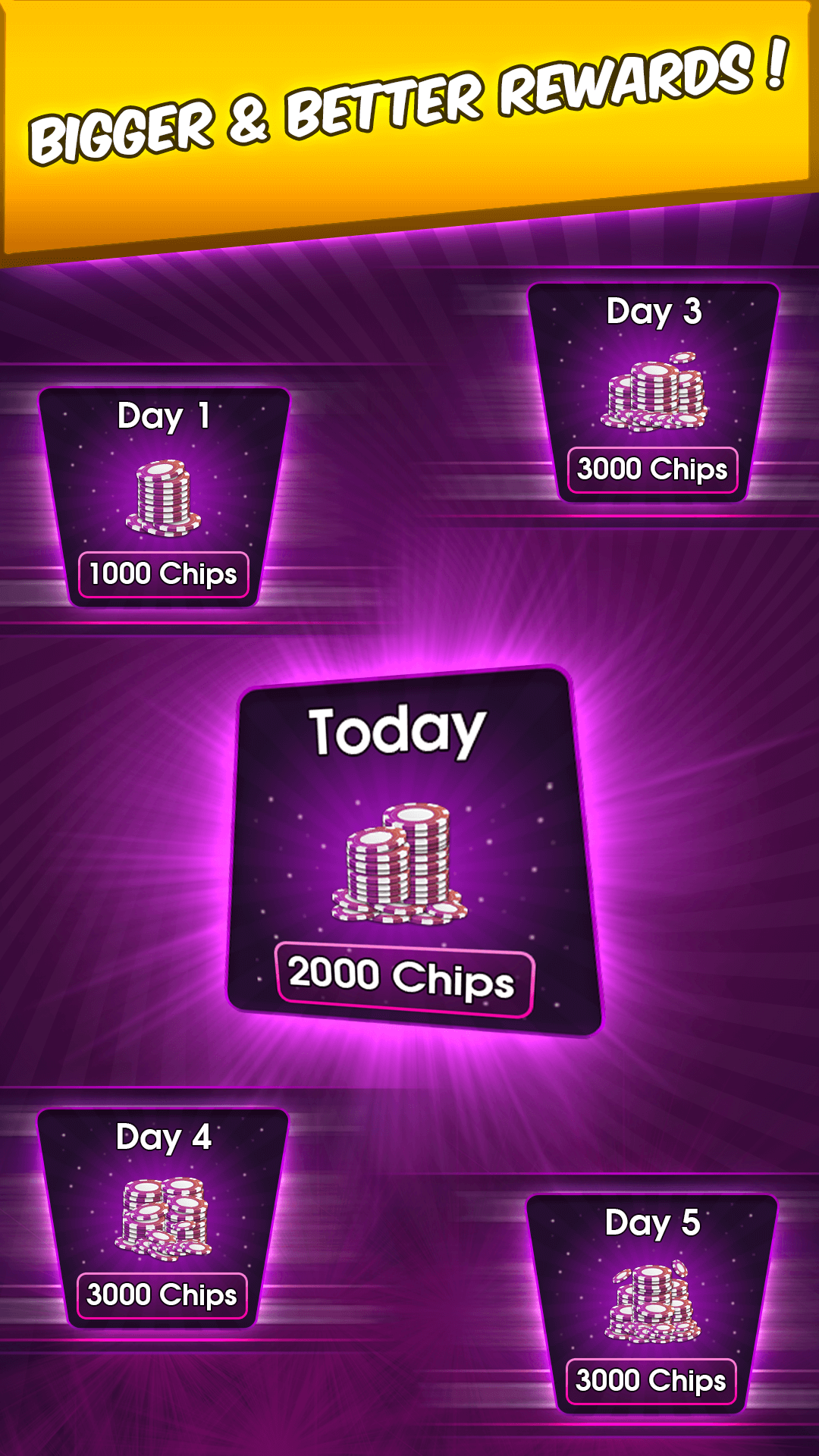 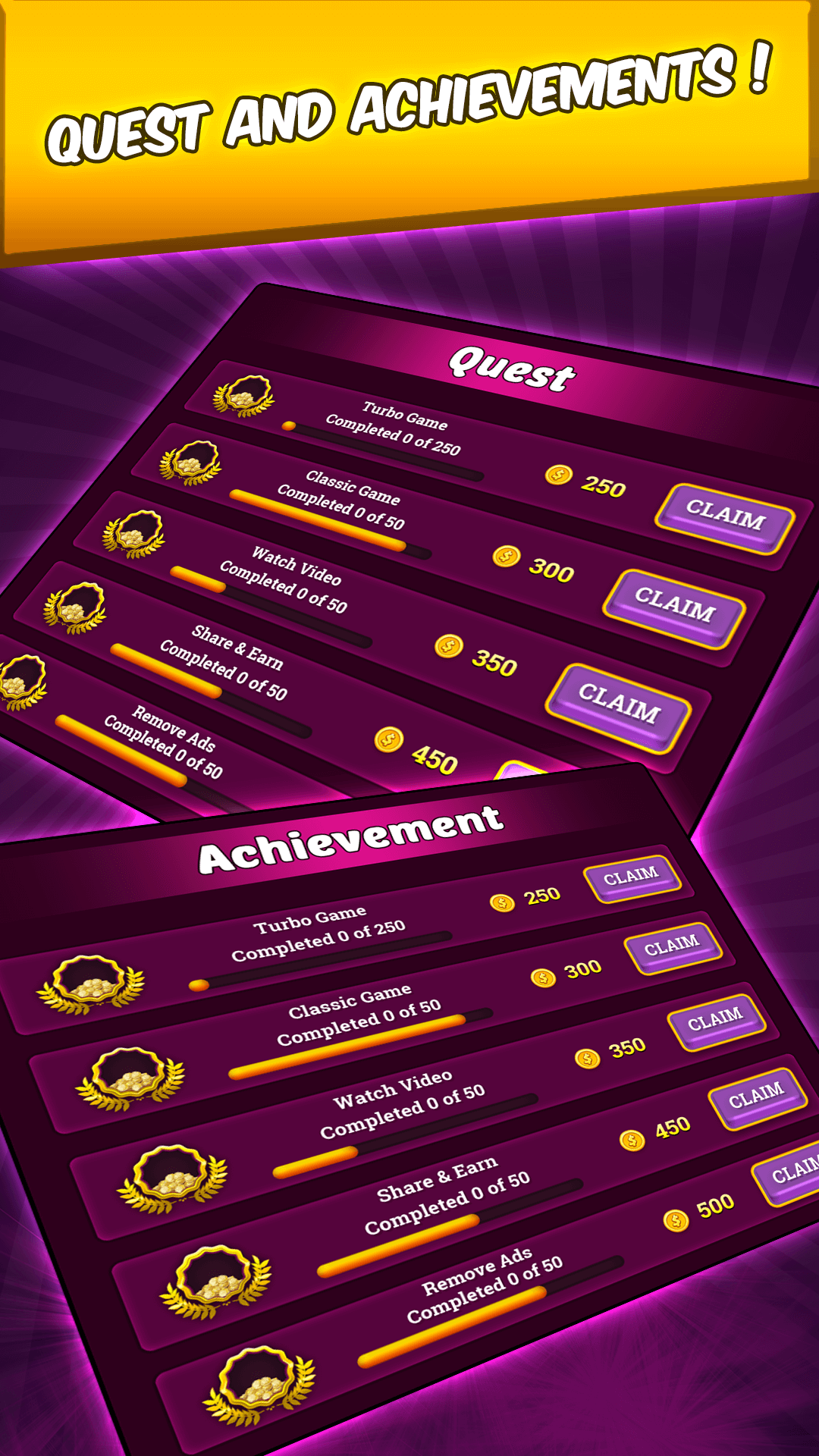 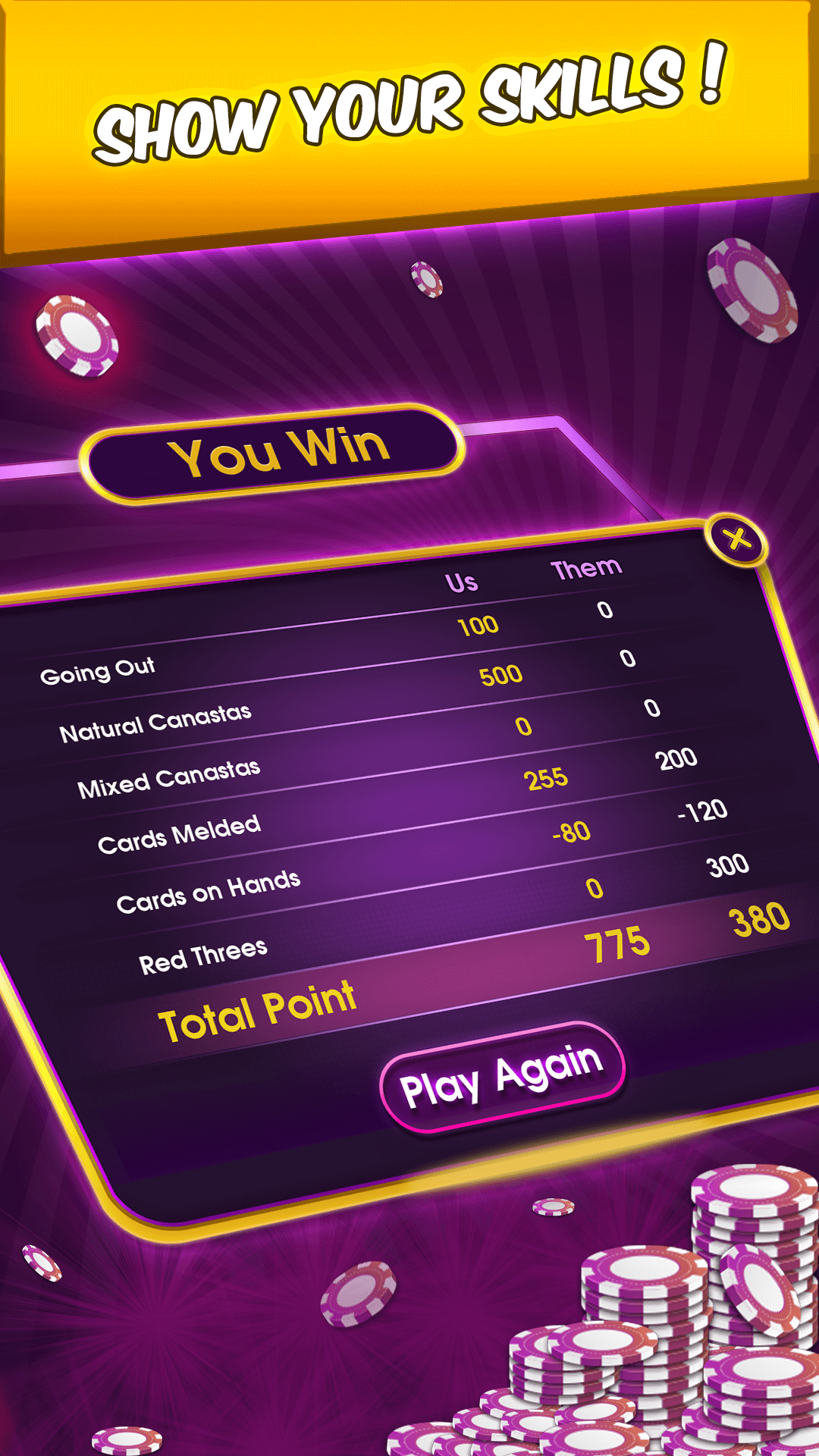 It's time to play Canasta! one of the most popular mobile card games finally comes to Android! The BEST FREE Canasta app for Android is now available!

Canasta is the most traditional and loved card game by all. It is an exciting mix of strategy, luck, and skill.

Download Canasta now! This game is a must-have for all Canasta lovers! Canasta in Spanish means "Basket". Canasta for two players is the same as four-handed Canasta, in a two-player game, each player plays for himself.

Canasta is generally agreed to be best for four players, playing in partnerships. Canasta is normally played with two standard 52 card packs plus four jokers (two from each pack), making 108 cards in all.

A basic turn consists of drawing the top card of the stock, adding it to your hand without showing it to the other players, and discarding one card from your hand face-up on top of the discard pile.

Canasta is a Rummy-type card game where the aim is to meld down combinations of cards of equal rank. A combination of seven or more cards is called a Canasta. Jokers and twos are wild cards. Play online in real-time with other players, either in teams of two or by yourself. Create your own customized table and invite your friends. Have fun!

- 2 or 4 players
- Clockwise or Counter-Clockwise
- Game is automatically saved each turn, so you can close it and continue playing later
- Realistic gameplay and graphics
- Intuitive single-player gameplay
- Undo function so you can cancel mistaken melds

To play cards to the table in this way is known as melding, and the sets of cards so played are melds. These melded cards remain face-up on the table until the end of the play. You are permitted to take the whole of the discard pile. In order to do this, you must be able to meld the top discard, without needing any of the other cards in the discard pile to make your meld valid.

A player "goes out" when no cards are left after a meld or discard. A player is not permitted to go out, however, unless there's at least one canasta.
In the game of canasta a meld comprising seven or more cards, including at least four natural cards (called a "base"), is a canasta

Regardless of whether you’re a seasoned Canasta player or giving it a go for the first time, If you like card games, you’ll love Canasta! Download Canasta now! enjoy yourself with your friends!!

Please don't forget to Rate and Review the Canasta Game. Any suggestions? We always love to hear from you and making this App better. Email us at info@gamewithpals.com.